Lynn was recently a guest on the Notably Disney Podcast. Click this link to check it out.

Lynn has also started a podcast with his son Luke is called The Height Restricted Podcast.

"Josh D’Amaro, president of the Disneyland Resort in Anaheim, will take over in November as president of the Walt Disney World Resort in Orlando, replacing George Kalogridis, who will take on a new position, overseeing developing strategic and operational business initiatives, the company announced Wednesday.

"In Anaheim, D’Amaro will be replaced by Rebecca Campbell, who has worked for Disney for more than 20 years, most recently leading operations in Europe, the Middle East and Africa."

By BRADY MACDONALD
September 27, 2019
"The one-two punch of the Main Street Electrical Parade and Halloween Screams fireworks show that brought big crowds to Disneyland will soon be replaced by an interim nighttime spectacular and a stopgap character cavalcade.
"The Band-Tastic Calvacade will run on Main Street USA from Oct. 1 through Nov. 7 after the Main Street Electrical Parade ends its current two-month return engagement on Monday, Sept. 30."

"The dueling piano show will be joined by a strolling magician who will entertain visitors in Frontierland as part of a new slate of live entertainment, Disneyland announced Wednesday, Sept. 18."

"A strolling magician arrives in town next week, with astonishing demonstrations of sleight-of-hand. During the fall season, this master of magic can be found on the streets of Frontierland, aboard the Mark Twain steamboat or mingling with patrons inside The Golden Horseshoe.

"Following later in the fall, The Golden Horseshoe lays out the welcome mat for a pair of piano players, ready to challenge one another in a good ol’ fashioned showdown. They’ll take turns playing iconic tunes of the Old West and even take requests from the audience. Think you can stump them? You’ll have to stop in and give it your best shot!"

"Inspired by the spirit of nature and Californian heritage, this full-service spa will be a rejuvenating retreat. Here, you can choose from an array of body treatments, facials, massage and salon services, all performed in a serene setting, sure to relax, revitalize and invigorate the senses."

By Anne Valdespino
PUBLISHED: September 24, 2019 at 4:00 am
"It’s a sea change from the days when a trip to America’s favorite amusement parks meant hot dogs and ice cream. Walt Disney himself had simple tastes. He loved cold wieners, chili and fried chicken. But the Slow Food movement has turned into the age of the foodie and the alterna-eater. With vegetarian and vegan diners proliferating, Disney has taken notice and taken it to heart.

"For a few years now the company has been developing recipes from coast to coast, some headed up by Dolven, a registered dietician, and Gary Jones, a Disney culinary dietary specialist, in the 7,000-square-foot Flavor Lab on a back lot at Walt Disney World Resort in Orlando, Fla. But it’s really a massive team effort as chefs and food and beverage experts in the parks, hotels and restaurants have educated themselves and experimented. Now they’re ready to dish up the results."

You can listen to show 269 on iTunes or go to Libsyn service here. 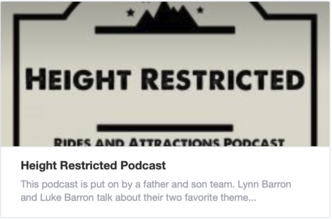