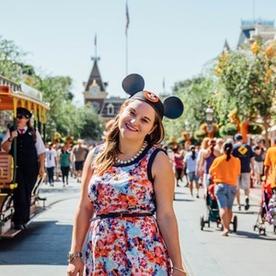 In this episode we talk with former Disneyland Attractions and Guest Relations Cast Member Austin Carroll.

Guest Relations. She has some great stories you wont want to miss. Plus the latest in the Disneyland Resort

Disneyland raises prices on most tickets and all annual passes

"Disneyland raised prices for most admissions Sunday,a move that was widely expected as the park prepares for the 2019 opening of its much-anticipated 'Star Wars' land."

"Disney Parks and Resorts increased prices on Annual Passes and single day tickets today. While last year’s increase was considered moderate (the high-end passes didn’t change in price at all last year), this year’s bump is more dramatic and reflects the big increase in attendance over the past year and the expected demand for the parks next year when Star Wars land opens."

"Disneyland will put a new themed spot called 'The Tropical Hideaway' between the Enchanted TIki Room and the Jungle Cruise in Adventureland, in a little used space that was formerly Aladdin’s Oasis. Park officials are calling it a 'dining location,' adding that few details are available at this time, but it won’t be a full-service restaurant. Continuing the park’s tradition, it will not serve alcohol."

The Tropical Hideaway Discovered in Adventureland at Disneyland Park

"Disney announced this morning that it will replace the now-closed Cove Bar and Ariel’s Grotto at Disney California Adventure with a new waterfront bar that will be called the Lamplight Lounge.

The new family lounge will occupy both stories of the original two-story building, which formerly housed Ariel’s Grotto, a family venue with character dining on the ground floor, and the Cove Bar, with its popular lobster nachos and specialty drinks, on the upper floor.

Disney fans and observers had been speculating for some time that the new venue, renovated to go with the new Pixar Pier theming of that section of the park, would combine both into one new spot.

In an announcement on the Disney Parks blog, officials said that the new lounge will open June 23, along with the rest of the Pixar Pier renovation at Disney California Adventure that also includes re-themed attractions divided into four new districts highlighting Pixar movies."

“'Welcome home!' That’s how shoppers are greeted when they enter Disney Home, a new boutique that opened Wednesday, Feb. 14, at Downtown Disney in Anaheim at the former D-Street location.

It’s geared for those who can’t live without Mickey and Donald coffee mugs, oven mitts that mimic Mickey hands and Dumbo candy dishes."

"Joining Chewbacca, Rey will visit with guests at the Light Side character experience throughout the summer, with Darth Vader and Kylo Ren encountering guests at the Dark Side area. Be sure to check the Entertainment times guide upon your arrival to the park, as encounter times are subject to change."

Disneyland withholds $1,000 bonuses for hotel workers until they agree to contract

"A union representing 2,700 housekeepers and other low-wage workers at Disneyland Resort filed a federal unfair labor practice complaint Tuesday against the entertainment giant for holding a promised $1,000 bonus “hostage” during contract negotiations.

The National Labor Relations charge by Unite Here Local 11 came the day after a written ultimatum from the Walt Disney Co. conditioning its bonus on the union’s ratification of the company’s latest contract offer.

The one-time bonus for 125,000 Disney workers was announced with fanfare in January, with the company attributing it to the corporate tax cut law, signed by President Donald Trump in December."

"Visit Anaheim, the official tourism organization for Disneyland Resort’s hometown of Anaheim, today released its visitation numbers for 2017. For the fifth year in a row, Anaheim welcomed a record number of visitors to the city—24.2 million to be exact—an increase of more than five percent from the previous year."

"Through May 21, each child age 2-12 can board an Amtrak Pacific Surfliner train traveling to the Anaheim Regional Transportation Intermodal Center for free with the purchase of an adult ticket. The ART Route 15 connector bus will shuttle Amtrak passengers from the ARTIC to the theme park for free.

The discount can be redeemed using the “V231″ promo code at the time of purchase.

Children’s fares are normally half of the lowest-priced adult ticket.

Other Amtrak promotions such as its 10 percent discount for AAA members will not apply to the Disney offer."

"Once train tickets are booked, passengers are eligible to purchase Disneyland SoCal Resident tickets at a 5 percent discount to visit Disneyland or Disney California Adventure.

Tickets must be purchased by May 21, and they expire on May 24. The passes come with blockout dates from March 23 to April 8."

"Mindy Kaling, Storm Reid, Oprah Winfrey and Reese Witherspoon, the stars of Disney’s upcoming “A Wrinkle in Time,” made a surprise appearance on stage at Disney California Adventure Park’s Sneak Peek Theatre following an exclusive preview of the studio’s upcoming Ava DuVernay-directed epic adventure. They later posed with “A Wrinkle in Time” fans in front of Sleeping Beauty Castle at Disneyland Park. The four stars also gave attendees a special “Tessering Ticket” that allowed them to get Disney FASTPASS access to several rides at the Disneyland Resort."

"The Disneyland social clubs make a point of following Disneyland’s rules since the last thing they want to happen is to be banned from the park. But there has been controversy over the years. Many accuse them of gang like behavior and old timers find their obsession with tattoos and dressing up like motorcycle gangs off-putting. The biggest complaint is how they sometimes move together in groups through the park (something everyone does, but is made more identifiable since they’re all wearing the same jackets)."

​ You can listen to show 229 on iTunes or go to Libsyn service here.