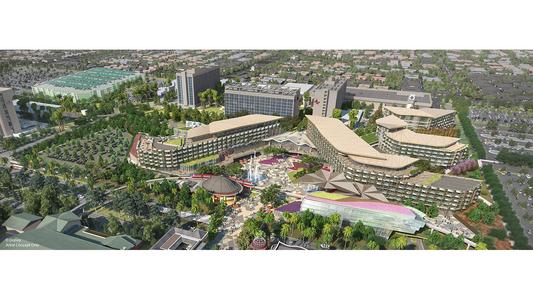 We are excited to have podcaster, author and friend Jeff Baham back to our show. This time we talk about Haunted Mansion fandom, Haunted Mansion History, and much more. You can find Jeff on Mousetalgia podcast and Doombuggies ,  and get his book at Amazon.

Plus we have the latest in the Disneyland Resort Current Events with guest author of the Seen Un-Seen Disneyland book series Russell Flores.
​

Disneyland cancels parking expansion on eastern side of park, focuses on new hotel and parking on west side

"Disneyland officials said the much-hyped Disneyland Eastern Gateway Project is dead — for now — and the new focus is on developing a new 4-diamond hotel and parking structure on the west side of the resort, which could open near the debut of Star Wars: Galaxy’s Edge in 2019.

After a year, Walt Disney Co. officials decided to pivot away from that project and began notifying city of Anaheim staff on Tuesday, Oct. 24, of new plans to build a new, 6-story, 6,500-spot parking structure on the Pinocchio Lot. The new lot would be next to its 10,000-spot Mickey and Friends parking structure and a yet-to-be-themed 700-room 4-diamond hotel in Downtown Disney."

Will the demise of the Eastern Gateway at Disneyland be a death blow for businesses on Harbor?

"Businesses on Harbor Boulevard near Disneyland in Anaheim might learn a hard lesson, as Disney confirmed that it will abandon the Eastern Gateway project that so many of them fought. Far from providing a win for the Harbor Boulevard community, Disney’s decision to turn away from its eastern face might become the death blow for some businesses on that street.

The Eastern Gateway project included a new parking garage for more than 6,900 cars, located between Interstate 5 and Harbor. That would have brought tens of thousands of Disneyland visitors daily to cross Harbor on their way to the parks. Local businesses fought the plan in part because those visitors would have crossed the street on a new pedestrian bridge, which opponents feared would keep foot traffic away from their businesses."

4 reasons why Disneyland may have dropped the Eastern Gateway Project

"The Disneyland Eastern Gateway Project was a massive development that included a seven-story parking structure, a new transportation hub with security screening and a pedestrian bridge over Harbor Boulevard on the east side of the busy street. The bridge, on the site of the former Carousel Inn hotel, would have helped funnel guests straight toward the ticket booths onto the esplanade area of Disneyland and Disney California Adventure. Disney would have also made other improvements around the area.

Over the years, Disney had spent more than $100 million acquiring nearby properties to prepare for the Eastern Gateway.

But as Disney announced the project, they failed to garner local support. Almost immediately, some neighboring businesses along Harbor Boulevard pushed back. A new City Council came in, with a different agenda, and then the council later dismantled and then reassembled the city’s planning commission."


Parking and Transportation Improvements Coming to the Disneyland Resort

New Hotel Coming to the Disneyland Resort in 2021

"As you can see in the photo above, this isn’t a themed hotel. It’s designed not unlike a funnel to channel people into the security checkpoint between the new hotel and Disneyland Hotel.

Speaking of the Disneyland Hotel. The classic Disney hotel which once boasted Monorail access will soon have an entire hotel sitting between it and Monorail access. That’s going to make the aging hotel a bit less of a draw. And perhaps all of this is just a first step to allow the eventual demolition and rebuilding of that property."

Disneyland half marathon officially cancelled, along with other runDisney races, in 2018

"RunDisney, the Walt Disney Co.’s race organization, announced Wednesday, Oct. 18, that it is canceling its half marathon and other races at Disneyland Resort beginning in 2018.

Races at Walt Disney World and Disneyland Paris will remain."

"Buzz Lightyear will do a flyover above Sleeping Beauty Castle in a brand new fireworks show at Disneyland.

Wilderness Explorer Russell and lovable golden retriever Dug from “Up” will make an appearance in the Pixar Play Parade.

And the Paint the Night parade is back and includes a new Pixar-themed storyline, but this time at Disney California Adventure.

Disneyland officials announced Thursday, Oct. 26, they will hold a Pixar Fest, a celebration of movies and characters from Disney’s Pixar Animation Studios, for a limited time to both Anaheim theme parks beginning April 13."

"Starting Nov. 17, visitors on board the 3-D simulator ride will explore scenes of Crait, a remote, uncharted planet that is expected to be heavily featured in the Walt Disney Co.’s upcoming “Star Wars: The Last Jedi” movie."

Jingle Cruise docked for the holiday season at Disneyland Resort

"Jingle Cruise, a holiday overlay of the classic Jungle Cruise, is staying on the dock this holiday season, a Disneyland spokeswoman confirmed.

A Disneyland spokeswoman did not elaborate on the reason why the attraction is not coming back this year. The Jungle Cruise will still operate and have touches of holiday decorations in the queue area but not on the ride."

​ You can listen to show 221 on iTunes or go to Libsyn service here.