In this episode we just got back from the D23 Expo, and there is much to share about our time at our booth, and that whole weekend. We shared a booth with Russell Flores, and Joshua Shaffer, and we had a blast so we invited them to come on the show and have a virtual round table discussion about our weekend. Plus mixed in is some Disneyland Resort current events.


"Chapek rolled a new sizzle reel for Galaxy’s Edge, which gave the audience several glimpses at the upcoming Star Wars: Rise of the Resistance attraction, which is set to open at Disneyland in January 2020 and this December in Walt Disney World. The attraction looks like it’s incredibly ambitious and employs a lot of impressive new effects. Galaxy’s Edge absolutely needs this ride open before the land will feel complete. With such soft attendance this summer, I can’t help but wonder if Disney is kicking themselves for opening the land without this E-Ticket ready to go."


D23 Expo: A closer look at the Marvel-themed Avengers Campus coming to California and Paris

"The Disney Parks Pavilion features a big section dedicated to the new Marvel-themed Avengers Campus lands coming to Disney California Adventure and Walt Disney Studios Paris. For all the space dedicated to the “Avengers Campus” lands in the Disney Parks pavilion, real substantive information on what these lands will offer is still pretty minimal. Hopefully more will be explained in Sunday’s Disney Parks presentation but until then, let’s take a bit of a closer look at what the show floor pavilion has to offer."

"Wow, what a weekend! If you’ve been keeping up with all the news from the 2019 D23 Expo, there’s a lot to digest, including the announcement of new attractions, ships, resorts, and partnerships around the world. We have a comprehensive roundup to all of our coverage from Disney’s Biennial fan event. Let’s take a look at what went down at D23 Expo this weekend."

Drake explained that the two Avengers Campuses in California and Paris come after the HYDRA attack on Stark Expo in Hong Kong Disneyland’s Tomorrowland. The Campuses were established due to a need for more super heroes, and guests will be invited on various adventures to train with and go on missions alongside the Avengers."

"Like the recently opened Star Wars: Galaxy’s Edge in Disneyland, the Avengers Campus will encourage guests to take a more participatory role. It’s expected that the Spider-Man attraction will have some game-like elements, and D23 Expo displays appeared to make it clear that guests — “amateur inventors,” in this case — will be able to digitally construct their own superhero suits as part of what the company is calling the Worldwide Engineering Brigade (WEB).

"Avengers Campus will also follow in the footsteps of Galaxy’s Edge in that, in contrast to topic-focused lands such as New Orleans Square or Adventureland, it will be laced with a bit of a plot. In Galaxy’s Edge, for instance, the story goes that the Resistance is hiding out in a nearby forest, and the evil First Order has just landed in an attempt to sniff them out. Guests enter the conflict, which can be explored via the Play Disney Parks mobile app, where there is a game for control of the land itself."

"Celebrating awe-inspiring moments of magic—both large and small—that are at the heart of so many Disney stories, “Magic Happens” reminds us we don’t need wings to fly, shooting stars were made to wish upon, and magic doesn’t stop at midnight.

"The action takes place at the El CapiTOON Theater in Mickey’s Toontown, where Mickey and Minnie are premiering their newest short, “Perfect Picnic.” Before you enter the cinema, you’ll experience a special exhibit created by the Toontown Hysterical Society featuring costumes and props from the toon world.

"Mickey & Minnie’s Runaway Railway puts you inside the wacky and unpredictable world of Disney Channel’s Emmy® Award-winning “Mickey Mouse” cartoon shorts! Once you step into the cartoon world of Mickey and Minnie, you’ll board a train with Goofy as the engineer. Then, one magical moment after the next leads you to a zany, out-of-control adventure filled with surprising twists and turns.


Avengers Campus: Everything we learned at D23 Expo about the Marvel land coming to Disney California Adventure

"In front of a crowd of cheering Disney fanatics at D23, the biennial celebration of all things Disney, Bob Chapek, chairman of parks, experiences and products, cataloged for nearly two hours the additions, expansions and overhauls planned for Disney parks in Anaheim, Paris, Hong Kong and Orlando, Fla.

Some of the announcements made at the Anaheim Convention Center came with musical presentations, and legendary Disney actor Dick Van Dyke made an appearance to plug a new feature at Walt Disney World Resort in Orlando."


D23 Expo: Is Disney’s intellectual property squeezing the theme out of our theme parks?

"Disney theme parks in recent years have been undergoing grand transformations, welcoming large-scale lands based upon acquisitions and partnerships. Movie-inspired areas such as Cars Land, Toy Story Land, Pandora — the World of Avatar and Star Wars: Galaxy’s Edge are in, while the topic-based lands of yore — Adventureland, Frontierland, Tomorrowland — are no longer in vogue with theme park designers.

"It’s a pivot that’s influencing the compositional purpose of the lands. Walt Disney Imagineers are increasingly emphasizing interactive elements and play-based experiences, and in the case of Galaxy’s Edge and the in-development Avengers Campus coming to Anaheim, a more plot-focused design approach. The increased cinematic influence is also gradually tweaking the very mission statements of the parks."

"Disney’s 'Jungle Cruise' will not only look familiar to fans of the Disneyland ride, but it’ll also echo some of the most beloved adventure movies to date.

"That’s what was teased at the D23 Expo on Saturday by the film’s stars Dwayne Johnson and Emily Blunt, who rolled into the morning presentation at the Anaheim Convention Center on a decorated riverboat and classic car."


Worker at Disneyland dies after being struck by metal panel

"A 38-year-old man died after being struck by a metal plate while working on an air conditioning system at Disneyland in Anaheim early Thursday.

"The man, who was employed by a contractor for Disneyland, was inside an 8- to 10-foot-deep trench in a backstage area outside the park installing chiller lines for an HVAC system shortly after 3 a.m. when he was injured, said Sgt. Daron Wyatt, a spokesman for Anaheim Fire & Rescue.

"The workers were lowering a piece of equipment into the trench when it struck a crossbeam and knocked over a metal panel, which fell on the man and knocked him over, Wyatt said."

"It’s been a busy week at the Disneyland Resort. With two concurrent events happening in Disneyland, the Haunted Mansion’s 50th Anniversary and the return of the Main Street Electrical Parade, people have been coming to see the spectacle in the last stretch of summer. Although the days have been fairly light, tourists have been packing the park nightly. But beware, the parks are expected to become MUCH more crowded beginning today, when the Deluxe Annual Passes are unblocked from Disneyland at long last.

"We’re also starting to see the first signs of Halloween decorations around the park. The big D23 Expo hits this coming weekend. And fall construction projects are starting to pop up . . . including a fond goodbye to Tomorrowland’s French fry rocks!"

"It was a busy weekend for the Disneyland Resort as tens of thousands of fans showed up for the biennial D23 Expo. And even as Bob Chapek revealed new project after new project from the Hall D23 stage in the Anaheim Convention Center, there was a bunch of significant work going on throughout the Disneyland Resort as well. So I packed my Expo badge in my back pocket and headed to Disneyland. So, let’s take a look at Tomorrowland rock removal, construction around the parks, the newly named Marvel land and much more, there’s a lot to cover. So buckle up, and let’s get started!"

You can listen to show 267 on iTunes or go to Libsyn service here.

A Few Cosplayers We Saw 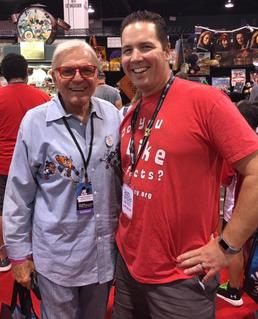 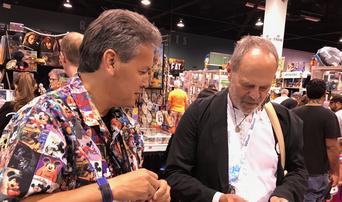 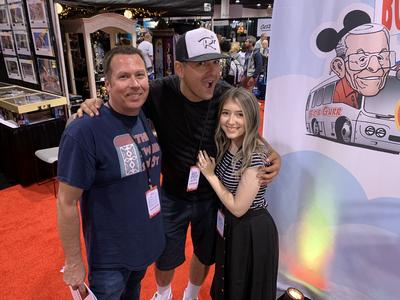 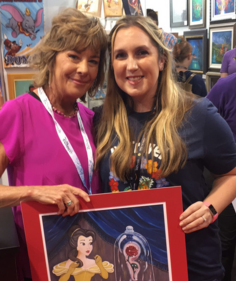 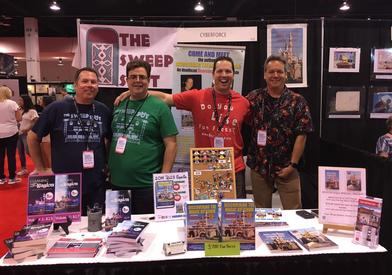 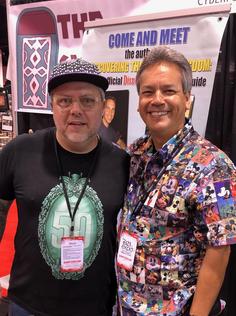 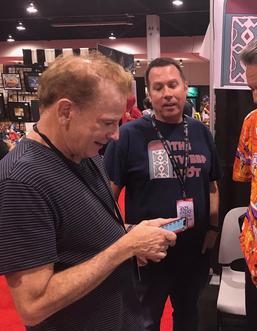 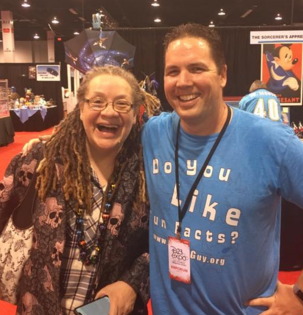 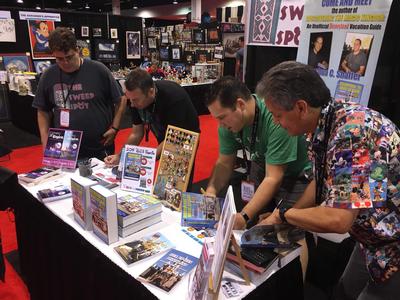 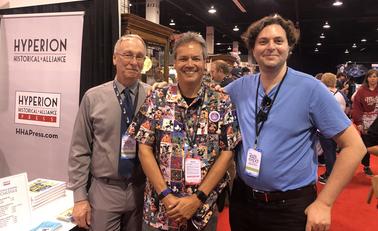