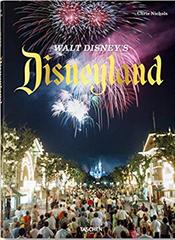 In this episode we welcome Chris Nichols and his wife authors of the new book Walt Disney's Disneyland. This book is amazing with concept art, photos black and white and color, and lots of information as well. This is a big book, but well worth it. We talk to him about why he wrote it, how, and how he and his wife wrote the book and their love for Disneyland. We also have the Disneyland Current Events, plus more.

"As of today, Disney has officially canceled plans for the Downtown Disney Hotel. The future of the west end of Downtown Disney is now in the hands of Imagineering for redevelopment concepts. Some new shops and establishments are being worked on right now."

"Disney has been telegraphing this move for months, but now it’s official. Signs of life are returning to Downtown Disney site where the hotel would have been built. The Earl of Sandwich has already reopened at Downtown Disney and plans to reopen more locations are in the works. It will be interesting to see what other businesses reopen while Disney comes up with another plan for the area."

Disney announces it’s pulling the plug on Anaheim luxury hotel
The hotel has been in limbo since earlier this summer when a change in location seemed to negate a tax incentive deal with the city.

"Union leaders worked hard to get a measure on the ballot that would require any hospitality company in the city of Anaheim that receives a tax benefit from the city to pay workers a living wage, in part as a way to pressure Disneyland into fair negotiations at the bargaining table.. A legal opinion from the Anaheim city attorney now says that Disneyland would not be subject to the requirement should the ballot measure pass.

It was hoped that Measure L would force Disneyland to boost pay for its employees. In response, Disneyland recently divested themselves of agreements with the city of Anaheim related to tax rebates to help build a new luxury hotel, and an agreement with the city not to charge taxes for admission media for 30 years."

"As we announced last year, a new 6,500-space parking structure is currently under construction near the Mickey & Friends structure at the Disneyland Resort. We are pleased to share the project is starting to take shape and it will now also feature a new pedestrian bridge over Magic Way.

This new bridge will connect visitors from the parking structure—over Magic Way— to the rest of the resort, allowing guests the option to stroll through the Downtown Disney District to the theme parks’ Main Entrance. In addition, the new bridge eliminates the foot traffic crossing the street at Disneyland Drive and Magic Way, providing not only convenience, but also greater pedestrian safety and better traffic circulation."

"Disneyland's popular Jedi Training Academy show has been a fixture of Tomorrowland for the past 12 years, but last week cast members received an end-of-run notice informing them that the last performance of Jedi Training: Trials of the Temple will be Saturday, November 3, 2018."

"In a tradition started by Walt Disney in 1965, Disneyland Resort President Josh D’Amaro announced the two newest Disney Ambassadors: Justin Rapp and Rafa Barron. The pair will represent the Resort and its 30,000 cast members during a two-year term, taking the magic of the Resort into the community by acting as emissaries of goodwill."

​ You can listen to show 245 on iTunes or go to Libsyn service here.