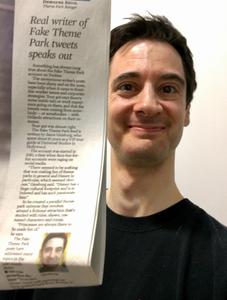 Fake Theme Park Guy -  In this episode we welcome comedian, former Universal Studios Hollywood Tram Tour Guide, theme park fan, and founder of Fake Theme Park, Jason Ginsburg. We have a not so Disney conversation, but a fun one that I'm sure you will find entertaining. Plus we have the latest in the Disneyland Resort current events.

"The Walt Disney Company is threatening to cancel plans to build its fourth hotel at the Disneyland Resort, following a dispute with the City of Anaheim over tax breaks for the project, Hugo Martin at the LA Times reports.

The Disneyland Resort had announced plans to build a 700-room, four-star hotel next to the Disneyland Hotel, on the site formerly occupied by several buildings on the western edge of the Downtown Disney shopping district. ESPN Zone, Rainforest Cafe, Earl of Sandwich, and the AMC movie theaters recently closed to make way for the project.
The trouble is that, when Disney originally applied for the tax break that Anaheim offered to developers of luxury hotels within the city, the resort said that the hotel would be built at 1401 Disneyland Drive, which is a site just north of the Disneyland Hotel. However, the project's current site has the address 1601 Disneyland Drive."

"This is all part of a multi-year plan negotiated between Anaheim and Disneyland. Disneyland was supposed to spend $2 billion on the resort in exchange for tax breaks, while the city would work to increase hotel capacity with more AAA 4-star hotels for the large crowds expected with the addition of Star Wars: Galaxy’s Edge (opening early next year) and future projects like Marvel-land.

This luxury hotel project was approved prior to a recent election which filled the Anaheim City Council with members who are less inclined to give tax rebates to hotel developers and Disney."


[PLEASE NOTE THAT OCREGISTER.COM REQUIRES A SUBSCRIPTION TO VIEW MORE THAN A FEW STORIES IN A CERTAIN TIME PERIOD. CLICK WISELY!]

What’s next for Downtown Disney, now that the hotel project is on hold?
BY MARLA JO FISHER
August 16, 2018

Disney had no choice but to pull back plans for Anaheim luxury hotel
BY JONATHAN LANSNER
August 17, 2018

"Looks like a ramp will be built in the Tiki Garden to allow wheelchairs to enter from the front door. As guests exit the Tiki Room they will be shuttled through the new Tropical Hideaway to help increase traffic in the corner of Adventureland as well as prevent crowd flow disruption along the main walkway of Adventureland. This means that both the entrance and exit will soon be wheelchair accessible."

Also, many pictures of the construction of Star Wars: Galaxy’s Edge

​ You can listen to show 241 on iTunes or go to Libsyn service here.