Thank you for contacting us! If needed, you will hear back within 48-72 hours.

Or leave a message for  The Sweep Spot here.

Russell is the author of the book "Seen, Un-Seen Disneyland" and his newest book "More, Seen Un-Seen Disneyland". He regularly goes to Disneyland, is a "Legacy "Annual Pass (AP) holder, DVC member since 2009, Walt Disney Family Museum member, and a member of the Disneyana Fan Club. You can get personalized autograph copies of  his books at his CyberForce online book store.You can contact Russ atauthor@sudbooks.com, his Seen Un-Seen Disneyland Facebook page (seenunseendisneyland) , his Seen, Un-Seen Disneyland web page (www.sudbooks.com), Instagram at seenunseendisneyland, follow him on Twitter (@seenunseend), and watch his videos onYouTube . Are you a RunDisney fan? Follow Russ' training and races at his @mydisneyruns Instagram page or My Disney Runs Facebook page. 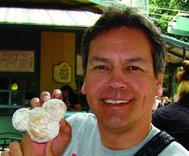 Ken Pellman (Host):  Ken Pellman resides with his stunningly beautiful & patient wife, their two strong-willed kids, & their three adorable sibling Shih Tzus in sleepy, little-known Anaheim, where he hears the Disneyland fireworks every night and often sees them, too. Frequent trips to Disneyland during his childhood became much more frequent when his parents bought annual passports for the entire family in 1985, planning for the kids to get their fill of Disneyland during that year & be done with it. Instead, Ken became interested in the history of Disneyland, theme park design, & collecting Disneyana, and obsessed with the construction of the original Splash Mountain.

Soon after becoming an Original Splashtranaut™, Ken joined the world of online Disney enthusiasm, becoming active on Mouse Ears BBS (and later Mickey’s Kingdom BBS and Mouse House BBS), later moving on to active participation in Usenet groups rec.arts.disney.parks & alt.disney.disneyland and being around to witness the launch of LaughingPlace.com, urging the owners to create discussion forums on the website in the days before mainstream social networking. Ken subsequently had his column and media reviews featured at LaughingPlace.com. The most recent contributions can be found here.

Ken became a Disneyland Cast Member in June 1990, joining the world-famous Disneyland Day Custodial Sweeping team, where eventually he met and became good friends with Lynn Barron. In June 2005, after fifteen years and two days as a Cast Member, Ken became “apart of the magic” and returned to being a Disneyland annual passport holder.

Today, Ken has over 17 years of experience as a Public Information Officer and freelances as a writer, editor, and voice talent, and of course he also co-hosts The Sweep Spot. He can be followed on Twitter @Kenversations and e-mailed at kenversations@flash.net. 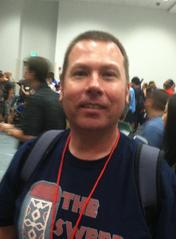 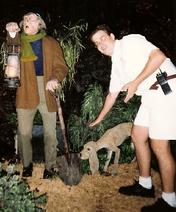 Lynn Barron (Host):  My name is Lynn Barron, and I grew up in Long Beach, Ca. I was fortunate enough to be able to go to Disneyland many times a year and eventually working there. I started out working at Disneyland in 1991 to 1993 in The Plaza Inn as a busser. I then returned back to Disneyland to work in Custodial from 1998 to 2007. During that time I was a working lead.

In 2007 my wife, son and I moved to St. George, Utah. I have always had an appreciation for Disneyland and its great history, so starting this podcast was an easy decision, but I wanted it to be different from other Disney podcasts. I wanted it to be a place to not only tell the history of Disneyland, but a place to share my stories working there. I hope this podcast can also be a place where other former cast members can come on our show and share their experiences as well. We are not professionals when it comes to podcasting, but we do have fun doing it, and hope others will learn new things about Disneyland. You can contact Lynn at thesweepspot@gmail.com .