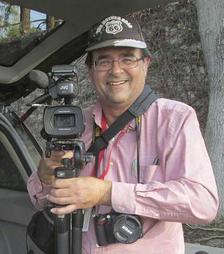 ​We are excited to talk to Mark Eades who worked at Disneyland, Disney Studio, Imagineering and is a free lance writer.

Mark had the chance to work at the studios, and Imagineering with Disney legends, and worked on some famous

projects you for sure have heard of. Plus the latest in the Disneyland Resort Current Events.

"Monsters will be taking over the Guardians of the Galaxy – Mission: Breakout! attraction at Disney California Adventure during the Halloween season this year.

The Disneyland Resort announced a new Halloween-themed overlay for the new attraction that opened in May 2017.

By day it will be the current attraction, but at night it will be transformed into Guardians of the Galaxy – Monsters After Dark."

"Disneyland got unanimous approval from the Anaheim Planning Commission last week to add an additional 455 parking spaces to its Toy Story lot off Harbor Boulevard and Convention Way. Guests parking there are shuttled over to the theme parks’ entrance.

"President Abraham Lincoln said hello, then dropped into silence as he seemed sad, then happy, then looked up to the heavens in wonderment – and anyone watching would swear he was real.

Except he wasn’t, he was an animatronic humanoid from the chest up — created by Garner Holt and his company in San Bernardino."


What Garner Holt’s Lincoln says about the future of technology

"It has 46 facial motions, including moving tongue and eyes, and seven neck motions. They have convincingly textured skin and hand-punched hair.

The figures have a proprietary silicone skin that had to seem realistic even though Holt said synthetics don’t move like human skin.

Lincoln nods and shakes his head, squints, rolls his eyes, and appears to react to onlookers."

DCA’s big Summer of Heroes campaign failed to launch despite a major advertising blitz. While guests seemed to love meeting with the super heroes, the rest of the activities fell flat and never really gathered an audience. But none of that will matter much longer as this lackluster marketing campaign wraps up mid September. And while the Training Academy and hopefully the Summer of Heroes Showcase will fade away, we’d like to see the park create some permanent and better sheltered meet and greet locations for their popular Marvel characters."

Talking Mickey isn’t a new thing. Guests have been meeting with talking Mickey at Walt Disney World for years, and tests have happened before at Disneyland as well. However, there’s really something magical about this technology."

"Both Space Mountain and Haunted Mansion Holiday will return on Friday, September 15th. But will this be the last year for these two Halloween overlays as Disneyland tries to get guests to shift their attention to DCA? Once Star Wars land opens, Disneyland is going to be packed daily for quite some time. They won’t need gimmicks like Halloween and Christmas to fill the park. But DCA has plenty of room for extra guests.  So that begs the question, what’s going to happen with holiday overlays such as Nightmare Before Christmas, Ghost Galaxy, Small World Holiday and Jingle Cruise? Just the tip of the iceberg in operational changes which may be coming to Disneyland in the wake of their largest and most highly anticipated expansion ever. I doubt it, the seasonal offerings are just too popular for Disney to let them sit in mothballs, but time will only tell."

As Fantasmic 2.0 moves to weekend only showings, crowds still crush around the New Orleans Square to view the new version of Fantasmic. At about 5:30 pm ropes began to be set up. Guests are allowed to sit and wait for the show in advance in the non-ticketed areas:

1 Hour allowed on the lower area on Stage Right (left as you face the stage) behind the Raft Dock to the Harbour Galley ( the old smoking section is used as disabled viewing zone and is off limits to the standby waiting section. Disabled guests can enter their viewing zone a 2-Hours prior to the show)

If you are traversing the West Side of the park between the hours of 6 to 8pm (before the first show of the night) be prepared to be stuck in gridlocked traffic as the area is roped off and most of the walkways are reduced significantly."


Before and After aerial look at Disneyland’s Star Wars Land

​ You can listen to show 217 on iTunes or go to Libsyn service here.