This week we have Seen, Un-Seen Disneyland book series author (and our web master)

Russell Flores as a guest host for our current events segment. Be sure to checkout Russ' posts

“Starting in late January, the new ‘Wondrous Journeys’ fireworks show will play at Disneyland while the revamped “World of Color — One” water show will take over DCA’s Paradise Bay.

“The Magic Happens parade — which debuted in late February 2020 with daytime and nighttime performances — will return to Disneyland after running for only a few weeks before the COVID-19 pandemic shut down the park for more than a year.”
…
“A Marvel Multiverse E-ticket attraction based on a new ride system planned for DCA’s Avengers Campus will be completely different from a Quinjet attraction announced with much fanfare during the 2019 D23 Expo.

“Walt Disney Imagineering went ‘back to the drawing board’ to develop an “entirely new concept” for the latest version of the Avengers attraction where Marvel superheroes will battle the King Thanos villain, according to D’Amaro.”
…
“The biggest surprise of the D23 theme park panel — at least as far as the Disneyland Resort was concerned — was the announcement DCA’s Pacific Wharf food court area will be transformed with a ‘Big Hero 6’ San Fransokyo theme.”
…
“The new backstory for Tiana’s Bayou Adventure finds the restaurateur-turned-princess opening Tiana’s Foods community co-op inside the aging salt mine within the former Splash Mountain with growers planting crops along the waterway that flows around the famed mountain peak.”

“Disney Parks Chairman Josh D’Amaro kicked off Sunday’s big Parks presentation with the place where it all started — Disneyland!  While the announcement-packed presentation didn’t include any word on a new Tomorrowland, who’s moving into Adventureland’s Treehouse, or any super new details for Tiana’s Bayou Bash, it DID include some major announcements.”

“Tiana’s Bayou Adventure will open at the Disneyland Resort and Walt Disney World Resort in late 2024.”

CONCEPT ART: Everything You Need to Know About the Upcoming Princess and the Frog Ride at Disneyland & WDW
By Dusty Sage -September 8, 2022

“The 45-minute Boot Camp in Disney California Adventure is available through the Tenaya Stone Spa at Disney’s Grand Californian Hotel as part of a host of in-park fitness programs.

“Do you have what it takes to conquer an entire day at Disneyland and Disney California Adventure from rope drop until the gates close without breaking a sweat? Then the $30 Adventure Boot Camp in DCA may be just the way to start your day.”
…
“The 6:30 a.m. DCA Boot Camp is limited to guests staying at the Disneyland Hotel, Disney’s Grand Californian Hotel and Paradise Pier Hotel and class sizes are limited to about 14 campers.

“If the boot camp and obstacle challenges sound a bit too intense, you can opt instead for a $30 Power Walking Workout in DCA. The 45-minute power walking session travels 2 miles around DCA at a 15 minute per mile pace — if the 20,000 steps you’ll log during a full day at the parks is just not enough for you.

“Most of the Tenaya Stone Spa fitness courses in Disney California Adventure cost $25 to $30.”

Nickelodeon Hotel coming to Garden Grove
The $277 million project, subsidized with taxpayer money, is billed as a plan to attract tourists and create jobs
By ROXANA KOPETMAN
PUBLISHED: September 16, 2022

“A Nickelodeon Hotel & Resort, featuring water slides and a lazy river, got the green light this week to be built in Garden Grove.

“The Garden Grove City Council unanimously approved the sale of city land to a developer for a Nickelodeon-themed hotel, with 500 guest rooms, a spa, restaurants, and a 600-seat theater.

“The $277 million project on Harbor Boulevard and Twintree Lane is slated for the city’s tourism district, called the Grove District, which attracts tourists visiting neighboring Disneyland.”
…
“The city and the developer are expected to close escrow on the property before the end of the year. Under a schedule included in the agreement, following approvals and permits, groundbreaking is expected by Nov. 1, 2024, and completion of the hotel is slated for 2027.

“The resort will feature a 23-story hotel, with a 9,490 square-foot ballroom, a variety of restaurants and other food areas totaling 22,296 square feet, a 7,000-square-foot arcade, a spa and fitness center, and 528 parking spaces. Other entertainment amenities will include a Nick Studio, a Studio Hall, and a Kid’s Lounge.”

“Halloween has officially arrived at Disneyland and we’re feeling hot, hot, hot! There’s all sorts of news, photos, and a whole lot of video for you today from both parks… Tomorrowland needs a future, new characters for Oogie Boogie Bash, everything old is new again, and more.”

“It’s been a whirlwind weekend here in Anaheim for the D23 Expo. Hopefully, you’ve been following along with us or had a chance to stop by our booth. If you did, thank you! If you’re just joining us and missed the entire weekend, well, there’s much to talk about. Let’s dig into what Disney is calling a “boundless” future for Disneyland full of Avengers, Toons, and a Bayou Adventure…”

You can listen to show Current Events 9/16/2022 on iTunes or go to Libsyn service here. 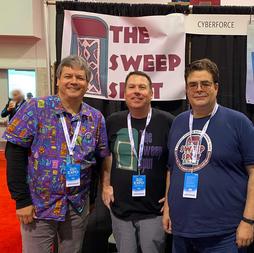