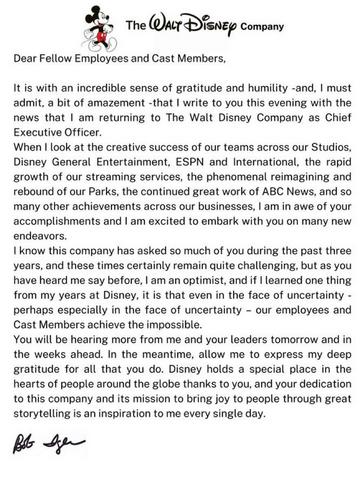 “Disney Cast Members and employees worldwide were greeted with shocking news Sunday night:  A letter from Bob Iger announcing his return to the company as CEO.   The retired CEO announced his return to Cast Members in a four-paragraph letter, which we have in full below:”
…
“The breathtaking news comes following Disney’s stock price dropping to five-year lows and recent news that Disney would instate a company-wide hiring freeze and expense reduction process (which would likely also include more layoffs).  In recent days, CNBC ‘Mad Money’ host Jim Cramer called for Chapek’s immediate removal. Here on MiceChat we had speculated for months that Chapek’s time was running out.
…
“Bob Iger will resume his role as Disney CEO effective immediately, now with the task of righting the wrongs left behind by Chapek: a demoralized workforce, five-year stock lows, and a company that has been pushed to its limits in the name of profit.  There’s only so much a creative company like Disney, which has been built on decades of quality and goodwill with its customers can take by Chapek-style leadership that prioritizes profit over everything else.”

“It’s Mickey Mouse and Minnie Mouse’s birthday! In honor of this special occasion, the Disneyland Resort is pleased to announce the official reopening date of Mickey’s Toontown in Disneyland park – March 8, 2023!”

“The Disneyland Resort stopped selling annual passes on Thursday, Nov. 17, just a day after it resumed selling the passes following a six-month hiatus.

“On Wednesday, Disneyland announced that people who didn’t currently have annual passes could buy the Inspire Key for $1,599. the Believe Key for $1,099 or the Imagine Key (available only to Southern California residents) for $449. Over the course of a few hours Thursday, the company paused sales of the Believe, Imagine and Inspire keys in quick succession.

“Guests who already have Magic Key passes may renew them if their pass is within 30 days of expiring, but passes are no longer available to new customers.”

“Disney California Adventure Park has unveiled a series of new Black Panther experiences coinciding with the release of “Black Panther: Wakanda Forever,” which garnered an estimated $180 million in its opening weekend.

“The Black Panther experiences, which launched Friday, Nov. 11, extend to other parts of the resort with a new mural installation in the Downtown Disney District by artist Nikkolas Smith.”
…
“The Wakanda activations will last through Jan. 8, but Michael Serna, executive creative director at Disney Live Entertainment, believes that the Avengers Campus at Disney California Adventure will experience a myriad of Black Panther stories in the coming years.”

“As has now become tradition, the beloved California centric version of the attraction is returning as a part of the Disney California Adventure Food & Wine Festival.
The culinary festival runs from March 3rd through April 25th, 2023, however, Disney officials have not confirmed an end date for Soarin’ Over California. It will likely just run for the duration of the festival.”

“The Disneyland Resort’s Lunar New Year celebration will return Jan. 20 through Feb. 15. In 2023, Disney California Adventure Park will launch several experiences coinciding with the Year of the Rabbit, which symbolizes longevity, peace and prosperity. The Anaheim resort also recognizes Orange County’s robust Vietnamese community with nods to the Year of the Cat from the Vietnamese zodiac calendar.

“All things merry and bright… at least that’s how it all appears at first glance. The holidays have kicked off with all the familiar sparkle and cheer. We finally have news on the Adventureland Treehouse (formerly Tarzan’s domain), and there was a delightful surprise at “it’s a small world” on Friday. Unfortunately, while Disney is trying so hard to make you feel warm and fuzzy, an icy dagger was thrust into the heart of the company by a grinch who would steal Christmas. A hiring freeze has been imposed from on high with layoffs on the way just in time for the holidays.”


Disneyland Update: The Return of the King and the Cursed Keys!
By Andy Castro -November 21, 2022

“What a wild week for Disney news!  Sunday evening Disney employees and fans alike were shocked to see news headlines that former CEO Bob Iger had dethroned Bob Chapek as head of the company!  After Iger retired as CEO in 2020, Disney weathered numerous storms under the leadership of his successor, Bob Chapek. While Chapek managed to steer Disney through the tumult of the closure of parks and theaters in 2020, he couldn’t survive the latest storm: a five-year low in stock prices. Even as Sunday’s news shook the entertainment world, the Disney community was already reeling from the rest of the week’s news: a botched one-day return of Magic Key sales, Mickey and Minnie’s birthdays, and the arrival of Grogu in Galaxy’s Edge.”

You can listen to show Current Events 11/22/2022 on iTunes or go to Libsyn service here.